Posted by editor on June 28, 2013 in harmonisation, Sustainability

Well, probably it’s a cliché, but the USAID water strategy has had the gestation period of an elephant, but the good news is that now it’s out and its congratulations to the team in the water office of USAID for pulling this together and for bringing a clear focus on water for human consumption and agricultural production – two basic building blocks of life. No doubt it was a challenging and sensitive task to take into account all of the competing interests across USAID’s many areas of strategic intervention. For the first time in years this strategy provides a focus, a hook, on which to understand and engage with USAID around the core issue of water and sanitation. 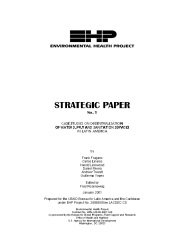 Not since the days of the Environmental Health Project (EHP) have we had such a concrete platform to consider how USAID sees its role in the water and sanitation sector.  It seems that since this initiative was shut down in the mid-2000s and the team of people at its core were dispersed  – or very sadly in the case of the wonderful  John Austin, passed from us – that USAID had lost its way somewhat in the world of water and spent a good five or six years in the wilderness. As I recall, the evaluation following the first IQC mechanism after EHP II concluded that USAID had ceased to become a world class leader in the field as it had been under the EHP (and its predecessor ‘WASH’ programme). In these halcyon days USAID providing not just significant funding, but leading field-based learning that helped to shape our collective thinking on many fronts, including the challenges of community management, decentralization and the hygiene improvement framework to name but a few.

So maybe this is starting to show my age – and maybe I look back on those days through rose-tinted spectacles having played a small part in EHP – but what now?  What does the new water strategy herald in terms of USAID – and the US government – again taking up the mantle as world leader in this field? Certainly the timing is right as we sit on the cusp of the 2015 MDGs and if we can believe it, WASH will have its own set of goals and targets this time around. My own assessment of the USAID water strategy is mixed and I have three big take away points.

The first is touched upon in John Oldfield’s excellent blog as the CEO of WASH Advocates – John’s principal concern is the limited ambition of USAID’s target numbers for access to water and sanitation facilities, with 10 and 6 million over five years respectively. And indeed, this does seem remarkably low – paltry even – when one considers that the Netherlands government has a target of 50 million by 2015 and the UK government has recently doubled their target to 60 million. It would seem that a country so wealthy, so powerful and with such bountiful human resources indeed could aim a bit higher.

But that is not the primary concern. What worries me more is that – just like DGIS of the Netherlands and DFID of the UK – the targets are expressed as numbers in the first place. Setting such numeric targets for first time access as the primary (and often only) goal is a dangerous game to play. A number of recent and strategically important evaluation reports from the European Union  and DGIS’s own internal auditing wing have reinforced this point. The weight of USA public pressure to ‘show results’ with such direct and tangible outputs must be tremendous, but we should do more to resist this as the only driver and descriptor of success. Otherwise we will fall into the same old trap of quickly rushing to meet the numbers, whilst doing little – and certainly not enough – to support the conditions for those provided with first time access to continue to receive a service long into the future.

The focus on ‘building in sustainability from the start’ as stated in the operating principles of the strategy is at least a counter-weight to the pressure of the numbers game. Another way of addressing this is to build the systemic capacity at a level of scale that ensures services can keep flowing, with a particular focus on unlocking financing resources. Colleagues at Water For People, Water and Sanitation for the Urban Poor and IRC International Water and Sanitation Centre, are working on this approach to support the vision of Everyone Forever in 30 districts and cities in 10 countries around the world. We know that addressing long-term access is a complex challenge, but USAID has experience of this in many other sectors, including in urban water reform, so this new water strategy should be bold and work beyond just the numbers game, however un-ambitious these might be. It is perhaps just a shame that there was no intermediate result specifically around sustaining services.

Linked to this observation is the second, and potentially much more positive, aspect of the water strategy in which USAID states that it will: ‘… seek investments in longer term monitoring and evaluation of its water activities in order to assess sustainability beyond the typical USAID Program Cycle and to enable reasonable support to issues that arise subsequent to post completion of project implementation’.  This is a powerful statement that hints at a way forward out of the dilemma facing donors of all shapes and sizes who have often found it difficult (and even impossible) to address sustainability ‘beyond the project cycle’. This dilemma was at the heart of one of the sessions in the recent symposium on monitoring held in Addis Ababa, which examined the accountability pressures facing aid agencies when it comes to monitoring what they achieve. In fact a member of the USAID water team delivered the same message at this symposium and it was great to see this commitment being made publicly.

My third take away from the water strategy is that it marks a watershed in how USAID may perceive itself in the broader context of development aid in the countries in which it operates. The strategy includes a thoughtful assessment of how USAID’s support can link with that of other donors in WASH and particularly with national government, including to the decentralised level. Although we probably will not see a shift in the basic delivery mechanism of USAID funding to the WASH sector – this will continue to be dominated by NGOs and private contracting firms – at least the strategy is clear on how the delivery of its assistance could and should be articulated with a much greater focus on supporting capacity development rather than direct service provision, including that of the local private sector. As many developing countries move from the lowest rung, to lower middle income status, so the role of development assistance must also change. The water strategy sets out a framework within which this can happen, whilst quite rightly recognising the need for direct service provision by these actors in fragile states and those impacted by humanitarian crises.

It is not likely that there will be appetite any time soon either from the US government or among public opinion to consider un-earmarked sector support or direct budgetary support.  So the focus on supporting host country ownership as one of the core operational principles of the strategy is an even more welcome one. In the long term it is the only way out of the continuous cycle of ‘projectised solutions’.  We must shift from aid delivery with a focus on numbers only, to genuine efforts to support the growth and maturity of water and sanitation sectors in the developing world – from technical expertise to learning and innovation capacity and good governance and leadership – otherwise we will forever be lamenting the lack of long-term sustained outcomes. This is not only a step in the right direction in terms of aid effectiveness principles, but it makes a lot of common sense in seeing the value of USAID support lasting beyond the first few years of investment only.

← Error 503: Service not available
At the start of true scale in monitoring →

Tweeting about water and sanitation services that last